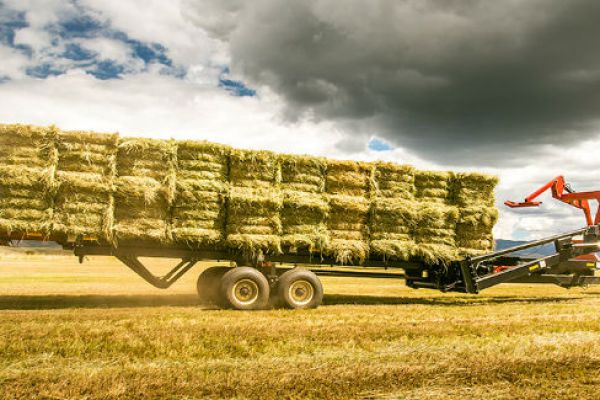 WITH YEARS OF ON-FARM TESTING AND REFINEMENTS THE FARM KING 4480XD SQUARE BALE CARRIER OFFERS SIMPLIFIED OPERATION AND AN INTUITIVE DISPLAY.
The Farm King 4480XD Square Bale Carrier improves it’s capacity with 9 4'x4', 20 3'x4' and 24 3'x3' bales picked per load. With full customization and the quarter turn option you can configure it to perform to your operation’s needs. The 4480XD features a host of new innovations and technology designed to increase efficiency, maximize durability and minimize bale damage.
- Less

UNLOADING
Unloading is quick and easy thanks to the innovative design of the carrier. The rear deck tilts backward, resting the back half of the load on the ground. Move the carrier forward and return the tilt deck to the neutral position. Push the remaining bales to the back of the carrier and repeat the process.

STACKING
The bales are stacked in tight rows. The strings are not touching the ground, which prevents prolonged exposure to surface moisture. As settling occurs, the bales rest together in a structurally sound stack.

REDUCE STRESS
The beams on the carrier deck have been covered with a special graphite coating that allows the bales to slide with minimal effort.

BALE PUSHER
After bales are lifted onto the deck, a pusher powered by two hydraulic motors moves the bales rearward. If the pusher senses resistance from a heavier-than average bale during regular operation, it automatically shifts to ‘low’ for five seconds to provide more power to push the bale. If the bale will not move, a sensor sends a message to the monitor to alert the operator. The sensor on the pusher motor counts revolutions to efficiently measure the pushback distance.

CHAIN
The chain that powers the pusher is recessed beneath the beams so the weight of the bale is never resting fully on the chain, minimizing bale stress and limiting the chance of string breakage.

CARRIER ARM
The reinforced carrier arm enhances the structural integrity of the machine. Hydraulic hoses and electronic sensors have been positioned to avoid being pinched or damaged by moving parts.